An amazing drawing... worth a thousand words.

Study this drawing for a couple of minutes- 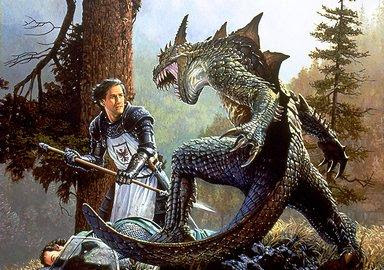 What is so captivating about this drawing?

I found this photo online a few weeks ago and decided to save it. I spent at least 10 minutes just looking at it... captivated by the drawing and trying to figure out why it was so captivating.

These are some of the thoughts I had while studying it.

Again, why is this drawing so captivating?

Perhaps it’s the ferocity of this mythical creature. It’s built like a powerful man, yet with the features of a lizard or dragon and with a mouth like one of those deep underwater fish creatures. The paws of this creature look powerful enough to kill a bull with one swing. How much more a man? Can you imagine this creature’s movements as it stalks and captures its prey? If the lion is the King of the Jungle, then this creature would certainly be King of the Forest. Nothing about it is weak or pathetic. Every feature declares its awesome power and might. Covered in scales so thick hardly a weapon can pierce it. Yet somehow, its right leg has been severed. (It’s difficult to see but its right foot is missing leaving a bloody stub) Here it is standing victorious over its first opponent, yet wounded terribly from the battle. What does this creature have to lose? It is visibly enraged by the loss of its foot and has turned its attention (or its wrath) to the other soldier. Though captivating, the creature doesn’t seem to be the focal point that held my attention in this drawing.

Perhaps it’s the fallen soldier on the ground. We’re left wondering if he is dead or just wounded. Was it he who cut off the creature’s foot? How did he manage to do that? How old is this man? From what you can see of his face he looks middle-aged, perhaps a bit younger. Does he have a family that depends on him? Is his wife waiting for him to come home? Many of these questions don’t have answers. And though the story behind this main was thought-provoking, this man isn’t the main focal point that held my attention.

Perhaps it’s the surroundings of this scene. It looks like it is mid-morning with the fog still waiting for the afternoon sun to drive it away. The characters are in a mountainess forest with evergreens shooting up around them; Out in the middle of the wilderness. Why are these soldiers out here? Were they searching for this creature to destroy it? If so, what has he done? Has he been killing off cattle, livestock, or been a menace to nearby villagers and travelers? Has he captured the princess of the kingdom and held her ransom? If these soldiers weren’t out to get him, were they attacked unaware of his presence? Does he rule this forest? Again, we don’t know; and again, there is something more to this drawing that captures my attention.

I thought about it longer and longer, and I came to this conclusion. What was so captivating about this drawing was the remaining soldier. Particularly his face. Yes, his uniform is exquisite. Yes, his weapons make him look well-prepared for battle. But, what caught and kept my attention about this soldier was his face.

Here he is, looking into the eyes of this ferocious creature which has just killed or wounded his comrade and has now turned all of its evil passion and rage towards him. This man’s strength pales in comparison to this creature’s might. How on earth is he going to survive an attack from such a creature? Suppose he was able to kill it; if he was wounded he would likely die from loss of blood on the trek back home. All these things are probably going through his mind.

He might return home as a hero but the odds are against him. He’ll be lucky to return home at all. Will his parents and siblings miss him? Perhaps he has sweetheart at home waiting for his return. How will she deal with his death?

Again, his face. There’s hardly a trace of fear yet you know that it is coursing through his veins. He stands ready, looking apprehensively yet unblinkingly in the face of death. Is he ready to die?

All I’ve got is this spear and my sword. Will either one even cut through his skin? Watch out for those claws and go for his neck.

He looks younger than the other man. Was that his mentor, an older brother, best friend?

O God, is Frederick dead? Or wounded? It doesn’t matter now. This battle is for him and if I live I promise to carry him home, dead or alive.

He does look young. Probably late teens or early twenties.

I’ve never killed even a bear before. Much less a creature like this. O God, please help me. Give me the courage to fight. Guide my spear and be my shield.

You also long for the courage this young man has. Would I really stand there and face such an evil foe? Or would I buckle and run? I trust that God will give me the courage to stay steadfast when I am faced with so much fear and evil.

That's all for now! Leave a comment if you have any further thoughts on the drawing.

P.S. Thanks to Dillon for telling me to post this. I tried describing the picture to him and he said I should post it. :) Thanks Dillon. :D